On the 8th November 2011, Bentley Systems announced that it had acquired Pointools, until then, a neutral provider of point cloud software technology. Almost overnight their plugins for AutoCAD, Rhino and Sketchup disappeared off the face of the earth along with their imminent plans to launch their long awaited Revit plugin.

For three years, Maltby Surveys trawled cyberspace searching for a worthy replacement. AutoCAD labs looked promising between versions 12 and 13. They previewed pointcloud tools with some real bite but sadly failed to make the release version and have since disappeared. Instead it seems pointcloud development funding has been channelled into Recap which despite its glossy cover doesn’t really cut it for surveyors. Most other applications either offer the earth or cost the earth or both and yet, in our opinion, fail to deliver what is really required in terms of usable tools to produce measured surveys from pointcloud data.

At last, a breath of fresh air in the form of Undet the latest release has been developed in 2015.

Maltby Surveys were commissioned to carry out a Laser Scanning project at the National Space Centre, Leicester . It is the UK’s largest visitor attraction dedicated to space and space exploration, welcoming around a quarter of a million visitors each year since its opening in June 2001. The National Space Centre was the brainchild of the University of Leicester, with support from Leicester City Council. It was the subject of a joint bid to the Millennium Commission as a Landmark Millennium Project for the East Midlands. Having trialled Undet for several months they decided to purchase the software. The transition from Pointools Model was fairly painless and two dimensional plans and sections were derived in a similar time frame to Pointools, even at the first attempt. 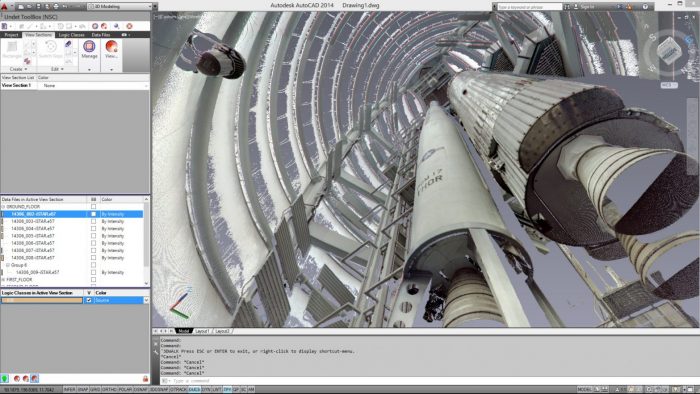 The project consisted of only 33 scan locations and was collected over the course of one day with a FARO Focus 120. The point resolution was set at 6mm @ 10m range. Scans were registered in Scene 5.3 and output as E57 files. Undet imports data from a variety of formats including E57, FLS, LSPROJ, PTS, ZFS, LAS, CL3, CLR ,RSP and virtually any XYZ format including all LIDAR data formats with Intensity or RGB. There are four project import types LIDAR, Topography, Buildings or Heritage which govern the decimation of the cloud prior to creating view sections. This allows for rapid navigating around the model. Individual scans can be named and grouped into logical sets such as external, ground, first, roof etc to help maintain an efficient workflow.

The concept of creating view sections is a simple yet very powerful tool to isolate working area and permit access to the full point cloud. A traffic light system gives notification of availability of further points. As you would expect, you have complete control over scan point display colour from true scan colours, through intensity to greyscale. The user can even define their own bespoke intensity range to control additional visual display depending on the reflective properties of the scanned object. Trueview Scan is a mode which allows a unique facility to view the scan data directly from the scan position. This is a great tool for novice users as it allows the user to navigate in a intuitive way. Wall, floor and ceiling planes can be extracted as 3d plane objects enabling the rapid creation of wireframe models. This assists the creation of Building Information Models or 3D CAD Models used in the context of Rights of Light analysis. 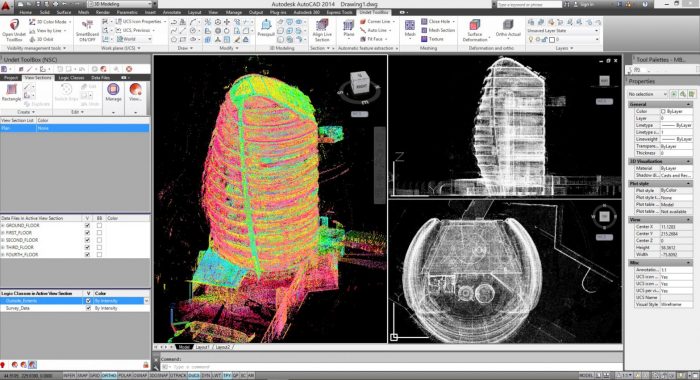